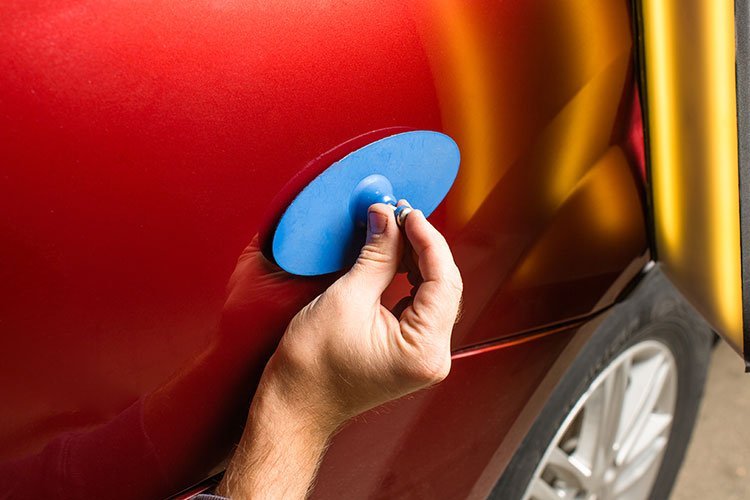 How much does paintless dent repair cost near me? Contact Dent Dawg if that’s the question in your mind right now. We’re a professional team of experts that have been offering quality dent repair for years. Our crew comprises highly trained and experienced technicians with the right skills, tools, and experience to fix any dent on your vehicle.

Even if your vehicle has a minor dent, it can eventually spread through corrosion and rust. To ensure that you do not sacrifice the impressive look of your vehicle, get dents fixed as fast as possible. No matter how small a dent seems, it can be the point where rusting or corrosion will start. That’s why you should hire experts to remove it the moment you notice it.

Our experts believe that paintless dent repair can be used to fix most dents. This is an innovative method of repairing dents without repainting it or using fillers. We use this method to remove hail damage, minor dings, and body line dents. What’s more, this method can be used to remove dents from aluminum and steel vehicle panels.

Factors that Influence Paintless Dent Repair Cost near Me

Several factors influence the cost of dent repair. Our crew will take time to analyze your vehicle carefully to determine the time and effort that will be required to restore its original look. Here are some of the factors that will influence the amount that you will spend on the repair.

The cost of repairing a dent increases with depth. The depth of a dent depends on how it was formed. For instance, if a hailstone dropped onto your vehicle, it may have caused a dent with a unique shape and depth. The unevenness and depth of a dent influence the time and effort its repair will cost.

The location of a dent influences how hard it is to remove. Accessing some dents is easier. This makes fixing them easier. However, some dents are located in hard-to-reach areas. These require more attention and extensive tools to remove. If a dent is located near the panel edge, removing it requires more precision and time. And this can increase the cost of its repair. But, if a dent is situated in the middle of a vehicle panel where there is no bracing behind, its removal is relatively easier. Thus, its repair can cost a lower amount.

The number of dents to be removed is another factor that will influence the cost of their repair. If your vehicle has been damaged by a hailstorm, it may have several dents to be removed. The cost of repairing many dents is lower if they are located in the same place or localized. However, if your vehicle has multiple dents in different places, their repair will cost more. That’s because more time will be required to fix the dents.

Why is the cost of paintless dent repair lower than that of traditional dent removal? This is probably the question that you’re asking after comparing several estimates. Well, paintless dent repair is a cost-effective method that delivers more satisfying results when done properly. At Dent Dawg, we follow a process that has been proven effective in removing dents.

Our paintless dent repair process is as follows:

Paintless dent removal does not involve sanding or filling. No chemicals are used and the vehicle regains the original shape and looks with ease. The skills, experience, and use of innovative tools enable our technicians to remove dents using this method faster.

Stop asking, how much paintless dent repair cost near me and contact Dent Dawg to request a free estimate now!